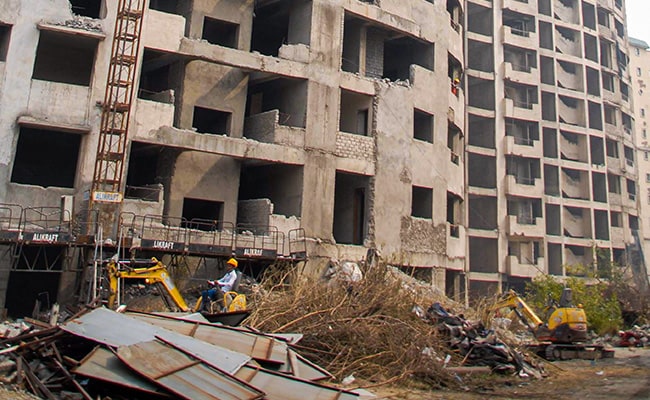 Supertech: This is the second major setback for the Noida-based developers in the last year.

The non-payment of around Rs 432 crore in dues led to India’s bankruptcy court ordering insolvency proceedings against real estate firm Supertech Ltd, one of the companies of Supertech group, documents showed on Friday.

Supertech Ltd on Friday was declared bankrupt by the National Company Law Tribunal (NCLT), a move that could have a bearing on 25,000 home buyers of the firm’s ongoing projects in the Delhi and NCR region.

Ruling on a petition filed by the Union Bank of India, the NCLT said: “There has been a default in payment of the financial debt” and appointed Hitesh Goyal as the Interim Resolution Professional (IRP) superseding the board of Supertech Ltd.

A two-member NCLT bench comprising PSN Prasad and Rahul Bhatnagar said the documents submitted by the financial creditor Union Bank of India as well as the corporate debtor Supertech had “substantiated” the former’s claim that there was a debt on which the builder had defaulted.

“In light of the above discussion, after giving careful consideration to the entire matter, hearing arguments of the parties and upon the appreciation of the documents placed on record to substantiate the claim, this tribunal admits this petition and initiates CIRP on the corporate debtor with immediate effect,” the NCLT said. CIRP refers to Corporate Insolvency Resolution Process (CIRP).

Apart from this, Supertech is also barred from transferring, encumbering, alienating, or disposing of any assets.

The default involves the loan given by the Union Bank of India to the Eco Village II project at Greater Noida (West) in Uttar Pradesh, which was being developed for Rs 1,106.45 crore.

In 2013, Supertech Ltd had approached various financial institutions to avail a credit facility of Rs 350 crore from a consortium of banks, and out of them, Union Bank of India, the lead bank, had an exposure of Rs 150 crore. A loan agreement was executed between the banks and Supertech on December 30, 2013, but the company repeatedly failed to make payments on time since then.

This is the second major setback for the Noida-based developers in the last year.

On August 31 last year, the Supreme Court had ordered the demolition of Supertech Ltd’s twin 40-storeyed towers, which are part of the under-construction Emerald Court project in Noida for violation of building norms.

Supertech Group said it would challenge the order before the National Company Law Appellate Tribunal (NCLAT).

However, it also added the NCLT order will not affect operations of other companies of the Supertech Group.

Supertech Ltd has 38,041 customers and out of them, homes have been delivered to 27,111 people. As many as 10,930 homes are yet to be delivered and among them, over 70 per cent of construction is complete for over 8,000 homes, according to Supertech Group Managing Director Mohit Arora.

When contacted, Mr Arora told news agency PTI, “there are around 11-12 housing projects in the Supertech Ltd against which insolvency proceedings have been initiated. Around 90 per cent of these projects are completed.” The debt of Supertech Ltd is around Rs 1,200 crore, including nearly Rs 150 crore loans from Union Bank of India, he added.

According to Mr Arora, three-four other companies in the group are developing many projects across Delhi-NCR, including the luxury project Supernova.