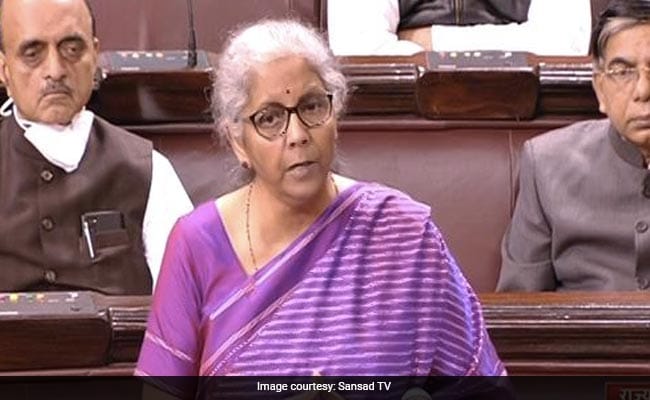 Finance minister Nirmala Sitharaman and Shiv Sena member Priyanka Chaturvedi traded barbs on the use of word misappropriation during a discussion in Rajya Sabha on Monday.

Taking part in the discussion on Appropriation Bills in the Upper House, Ms Chaturvedi cited various newspaper headlines to attack the government on issues like low employment rates across states and the lowest EPFO rate in 40 years.

She also pointed to the slide in the value of the rupee and “lack of government support” to the MSME sector.

“The kind of Budgets which have been presented have restricted the level of growth… these are headlines from the last two months and from this, you would come to know whether it is appropriation or misappropriation. I would not like to go into details regarding this,” Ms Chaturvedi noted while opposing the Bills.

With treasury benches objecting to the data shared by her, Ms Chaturvedi stated that she is ready to share the sources of information she had given on the floor of the House.

“There is the NSSO survey, will you deny that as well? You keep on telling lies most of the time and then we are asked to authenticate the facts,” she retorted as treasury benches continued to interrupt her.

Interjecting in the matter, Mr Sitharaman said: “I just want to be sure if I heard this right. It is the Appropriation Bill that has come here and in its reference, if I heard it right, ‘misappropriation’, it is an inappropriate word to speak if it was used for this.” She noted that if the word misappropriation has been used in the context of the bill, it was not right as the bill deals with excess demands for grants based on the recommendations of the Public Accounts Committee (PAC).

Surendra Singh Nagar, who was in the Chair, said that the word would be examined and if found unparliamentary would be removed from the proceedings of the House.

Ms Chaturvedi noted that she did not know that the word misappropriation would turn out to be unparliamentary.

“Possible, it would have become now..if in future I use the word miscalculation, then they would also call it unparliamentary,” she quipped.

Ms Sitaraman then said: “I just asked her a question. I will appreciate if the member can just explain if she had used it in the context of the Appropriation bill which is in response to the PAC and if it is not used in that context, I have no answers to give, I have no questions to ask.

“Misappropriation in the way policies are handled in this country which is pretty obvious by all the headlines I have shared,” she stated.

Earlier Binoy Visvam (CPI) also opposed the bill, alleging that every section of society was suffering due to the wrong policies of the government.

Fauzia Khan (NCP) said that over three crore youths have lost jobs during the COVID-19 pandemic.

She also pointed to the “low” allocation to the defence sector in the Budget.