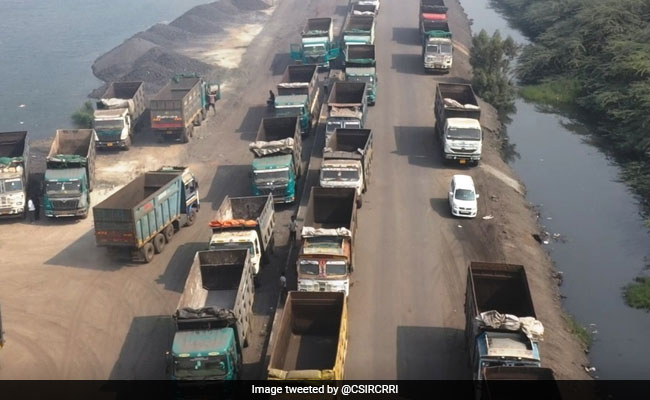 The road is made using 100% process steel aggregate and substitutes natural aggregate.

Nineteen million tonnes of steel waste produced by different plants around the country each year that generally go to landfills may soon be find a use – to make roads that not only utilise an unused resource but also be more durable.

Under the first such project as part of a research, a road made with steel waste has come up in the city of Surat in Gujarat at the Hazira industrial area.

It is sponsored by Council Of Scientific And Industrial Research (CSIR) and the Central Road Research Institute (CRRI) with help from the Ministry of Steel and Policy Commission and the NITI Aayog. The project also taps the Government of India’s Waste to Wealth and Clean India Campaign.

#Steelslag road built with 100 % processed steel slag aggregates in all layers of bituminous roads at Hazira, Surat in collaboration of @CSIRCRRI & @AMNSIndia under the R&D study sponsored by @SteelMinIndia. @NITIAayog@TATASTEEL@jswsteel@RinlVsp@NHAI_Official@CSIR_INDpic.twitter.com/dNHxxdnAZA

The pilot project road is 1 kilometer long and is a 6-lane highway. It is made using 100 per cent process steel aggregate and substitutes the usual materials. According to CSRI, the thickness of the road has also been reduced by 30 per cent. It is believed that this new method can prevent the roads from any damage caused during the monsoon season.

“This 1-kilometer-long road at Hazira Port in Gujarat was earlier in bad shape due to trucks carrying several tons of weight but under one experiment this road was made entirely from steel waste, now more than 1,000 trucks, 18 to 30 every day are passing with tons of weight, but the road remains the same,” CRRI Principal Scientist Satish Pandey said.

With this experiment, the highways and other roads can become stronger and the cost is also reduced by about 30 per cent, Mr Pandey further said.

Steel plants across India generate 19 million tonnes of steel waste every year and could grow to – according to one estimate – 50 million tonnes by 2030.

“Steel plants have become mountains of steel waste. This is a big threat to the environment, that is why on the instructions of NITI Aayog, the Ministry of Steel gave us a project to use this waste for the construction many years ago. And after research, scientists processed steel waste at AMNS Steel Plant in Surat and got the ballast prepared from steel waste,” Santosh M Mundhra, Executive Director, AMNS, said.

With the success of its first pilot project, the Government of India is planning to use the steel waste in the construction of highways to make the roads stronger in the future.