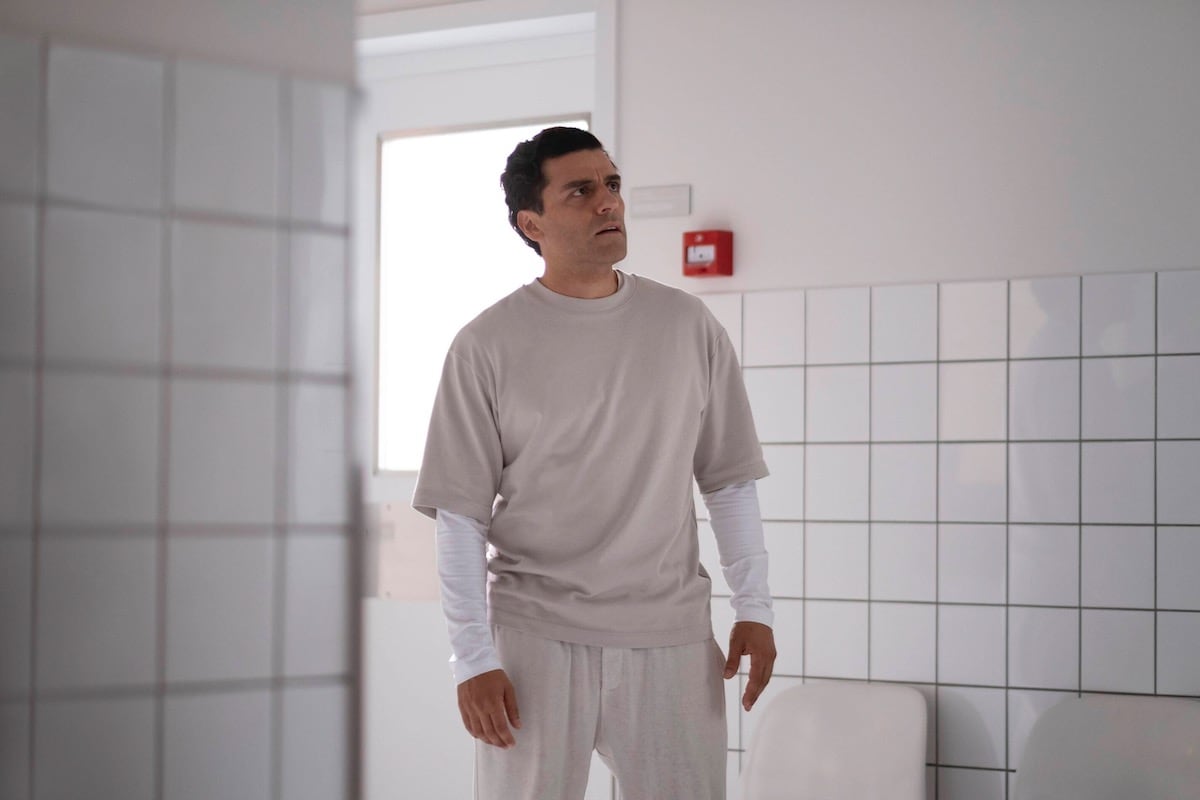 Moon Knight episode 5 — out now on Disney+ and Disney+ Hotstar — is easily the best episode of the new Marvel Cinematic Universe series so far. To be fair, that’s a very low bar. Moon Knight has struggled to be a thrilling adventure in the standard action-oriented sense. And its attempts at humour, crucial to any MCU property, never really landed. But in a way, that’s exactly why Moon Knight episode 5 succeeds. It’s not a standard Marvel episode, not only unlike what Moon Knight had served up until now, but unlike most episodes of past MCU series. It comes closest to a few WandaVision episodes, in how psychological it was. At times, Moon Knight episode 5 is a bit hall of mirrors, with Marc having to confront his past — that’s what gives the episode so much of its power.

We also got the answer to the big question coming into Moon Knight episode 5. Of course, Marc Spector (Oscar Isaac) and Steven Grant (Isaac) weren’t truly in an asylum. (The hospital and psych ward are just their gateway to the afterlife.) The fact that they were in separate bodies had given that way, on top of the whole talking hippopotamus. Oh yeah, that’s the Egyptian goddess Tawaret (Antonia Salib) — who was a delight, I must say. There were no other characters in Moon Knight episode 5, save for Tawaret and Dr. Harrow (Ethan Hawke). It’s just Isaac acting against Isaac, and he’s so good that Moon Knight episode 5 largely succeeds on his strengths alone.

In some ways, Moon Knight episode 5 also served as an origin story for Marc — an interesting choice given this was the penultimate episode for the MCU series. Next week’s episode 6 is the season and series finale. While I enjoyed Moon Knight episode 5 for its psychological exploration of the protagonist, it is still an entire episode devoted to backstory. What does that say for the series’ forward momentum? We will no doubt return to that tale on Moon Knight episode 6, but given how the first four episodes fared, I can’t say I’m very optimistic about the handling of the conclusion.

Moon Knight episode 5 — titled “Asylum”, directed by Mohamed Diab, and written by Rebecca Kirsch and Matthew Orton — opened with Marc back in the chair with Dr. Harrow (Hawke) who claims that he’s actually in Putnam Medical Facility in Chicago, Illinois. He has fantasies of being a superhero, which is why he keeps picking imaginary fights in the hospital. As proof of his theory, Dr. Harrow asks Marc to identify between events that make sense and those that are nonsense. I mean, there was a talking hippopotamus in there — at the very end of Moon Knight episode 4 — after all. Dr. Harrow wants Marc to return to his earlier story, but as Marc loses control, he’s injected with a serum, and we end up with the hippo scene again.

With Marc and Steven wondering what’s up with the whole situation, the talking hippo tells them they are dead. They were shot by Arthur after all. The place they are in now is the Duat, the Egypt underworld as Steven calls it. Steven also figures out that the talking hippo is Tawaret, the Egyptian goddess who was briefly referred to in Moon Knight episode 1. But because the Duat can’t be comprehended by the human mind, they’re projecting their own meaning to it. For Marc and Steven, that’s weirdly a psych ward. This is the afterlife — or well, an afterlife, as Tawaret points out on Moon Knight episode 5. I like how Tawaret is played as like a goofy goddess, who seems to be a mix of joy, nerves, and pity as she runs through the gears for what’s next for Marc and Steven.

A bewildered Marc goes through one of the many doors and ends up on a boat. The boat is seamlessly sailing on sand, if you needed additional confirmation of the fact that this place is not tethered to any reality. Marc is convinced this is actually the underworld. Steven and Tawaret throw in a couple of more Egytian mythology terms, but it all boils down to this: Tawaret pulls their hearts out and balances it on the scales against a feather. If their souls aren’t balanced, they will be thrown overboard. Otherwise, they get to spend eternity in paradise. Um okay, that’s neat. Except their hearts are incomplete, Tawaret learns, and tells them to return to the “psych ward” in Moon Knight episode 5, where they must confront the truth, and help uncover what they’ve been hiding from each other.

Moon Knight Episode 3 Recap: Giza, Ennead, and Turning Back the Night in Egypt

The doors of the psych ward are basically gateways to past memories. Steven picks one and walks in, where he discovers a room that is filled with Marc’s kills from all over the world. As Marc grapples with his actions — though he also justifies them with words that befit Khonshu’s tongue — the scales start to slow down. Just then, Steven spots a little boy in the room, who runs away from them and takes them into another room on Moon Knight episode 5. Steven is first in, and he locks the door behind him before Marc can enter. Here, Steven learns that he had a little brother named Randall “RoRo” Spector (Claudio Fabian Contreras) who drowned while they were playing as kids.

Adult Marc finds another door that leads to Randall’s funeral, where he’s reunited with Steven. At the funeral, the mother Wendy Spector (Fernanda Andrade) lashes out at young Marc (Carlos Sanchez) and blames him for his son’s death. Her hate continues through the years, even on Marc’s birthdays. Eventually as a teenager (David Jake Rodriguez), Marc leaves home because of his mother, despite protestations from his father Elias Spector (Ray Lucas). All this while, adult Marc is trying to push Steven out of the memory — and they eventually do end up in a different memory on Moon Knight episode 5.

It’s the ill-fated mission in the desert, where Layla’s father Abdallah El-Faouly (Usama Soliman) died and where Marc was left for dead. Turns out Marc was about to kill himself at the base of Khonshu’s statue, before the vengeance god spoke to him and made him his Moon Knight. It’s a bit of a spin on the tale from Marvel comics, where Marc actually dies before being resurrected. Here, on Moon Knight episode 5, Khonshu turns him to his side before he breathes his last.

As Marc and Steven bicker over how Khonshu has been using him from the start, they hear voices and return to Tawaret on the boat. Souls are dropping into the underworld, Tawaret says, and they are being judged in the upper world before their time. That more or less implies Harrow has unleashed Ammit. His plan was to do exactly this: judge and condemn folks before they commit the crime, à la Minority Report. Marc/Steven wants Tawaret to help send them back, but she reminds them that their body has a bullet in it. Maybe you can send word to Layla? She can help us free Khonshu, Steven believes. Tawaret agrees, and steers the boat towards the gate of Osiris — the only exit out of here. But they do have to get the scales balanced, she tells them on Moon Knight episode 5.

As Marc and Steven return to the psych ward, the latter says he wants to go to the childhood room that Marc previously stopped him from. Steven does his best to really drill into Marc, noting that if they fail, all the blame — including Layla’s death — will be on his head. It’s enough to upset Marc who begins beating himself up, and then finds himself back with Dr. Harrow. I wonder if any part of this actually happened with Marc out in the real world. Or is it just a coping mechanism that’s part of their afterlife? Anyway, as Dr. Harrow calms Marc down, Moon Knight episode 5 finally takes us into the childhood room.

Why did Marc not want us to see this? Because this is when Steven was born. With their angry mother smashing on the door inside, the young and afraid Marc created the Steven personality in that moment. Someone who could bear the pain. Moon Knight episode 5 shies away from actually showing us Wendy hitting young Marc/Steven with a leather belt, but the sound effects are chilling — and adult Marc does say as much in words to adult Steven as he pulls him out of the room. Marc also lets slip that their mother is gone, which is more than enough to send Steven over the edge. He thinks he’s been talking to her every day.

Unable to deal with everything that’s going on, it’s Steven this time who ends up with Dr. Harrow instead of Marc. It’s like Dr. Harrow actually exists to help Marc/Steven help realise and confront things they are too afraid to do otherwise. With Steven worried about his mother, Dr. Harrow says he will call her up so Steven can speak with her. But the moment he picks up the phone, Steven starts making excuses as to why she might not pick up. It’s like he knows, within himself, what’s about to happen. As Dr. Harrow passes the receiver to Steven on Moon Knight episode 5, Steven admits to himself that that his mum is dead.

We are pulled into Marc’s memory of the funeral. Still upset over how she treated him, Marc simply never actually went in, even as his father nicely asked him to. Marc turns around and walks down the street, before collapsing to the floor, and giving way to Steven, his coping mechanism. The observing Marc notes to the observing Steven that this was the moment — about two months prior to the events of the series — where their lives started to bleed into each other. Marc and Steven finally have a heart to heart, but as they return to the boat, Tawaret notes the scales still aren’t balanced. Ugh, what is it going to take? Well, turns out, time’s up on Moon Knight episode 5.

As Tawaret magically disappears, unbalanced souls of the Duat board the boat to claim their souls. Marc tries to fight them off, but it’s not enough. Steven realises he’s really Marc in a way, and he begins fighting with the same gusto. He does pretty well actually, even though he’s more passionate than he needs to be. But as Steven tries to save Marc from another unbalanced soul, he ends up over board and flat on the sand. Marc tells him to run and get back on the boat but as Steven tries to walk, he’s frozen into sand (of sorts). Marc shouts for the boat to be stopped — this is enough to finally balance their scales too, Tawaret declares as she returns — and not only does it stop, the boat also disappears. As Marc turns around, he finds himself standing in a farm with a bright orange sun lighting it all up.