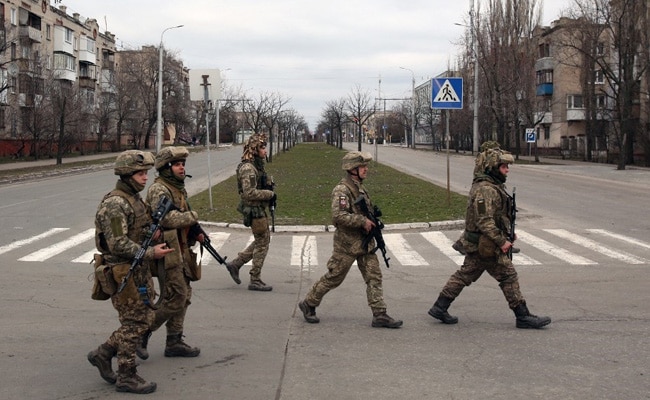 The director had no hesitation joining the defence when Russia launched its invasion of Ukraine.

Ukrainian filmmaker Oleg Sentsov spent five years in a Russian jail for protesting against its seizure of Crimea, and now he is on the frontline fighting for revenge.

Instead of being behind a camera, the winner of the EU’s Sakharov rights prize has signed up as a territorial defence volunteer to fight back Moscow’s invasion.

“This fighting is not how you imagine it from the movies,” says Sentsov, wearing khaki camouflage and a beanie, a beard covering his previously clean shaven face.

“Close contact, shooting from small arms, there is not so much of it. Most of the time this is artillery and your task is to hold the frontline in the trenches, and not to die from the shelling,” he tells AFP.

The 45-year-old coughs repeatedly from an illness he says that came on during a break of a few days from serving on the front against Russian forces in freezing conditions.

Sentsov was forging a successful career as an independent film director when the Maidan protests in 2014 and Russia’s subsequent annexation of Crimea turned his life upside down.

Convicted of planning arson attacks, he was sent to a penal colony in the Russian Arctic where he staged a 145-day hunger strike during which he lost 30 kilos (66 pounds) before his release in 2019.

Leaning against a barricade, Sentsov says his long years behind bars in Russia had shown him that Moscow would not be satisfied with just taking Crimea.

“Some of my friends after I was released from the captivity would say ‘Oh, you’re so radical, hating Russians, they are not so bad,” says the filmmaker.

“But now they understand me, because I spent five years there, I saw how they treat Ukrainians, Europeans, with their imperial ambitions, their cruelty.”

“From the first days of war I joined the Territorial Defence,” he says, and spent two weeks manning checkpoints on the outskirts of Kyiv.

But he was then pushed up to the “first line of defence” alongside military units in the forests in an undisclosed location outside Kyiv.

Russia “made a Vietnam” for the Ukrainian forces with intense barrages of shelling and rocket fire that they resisted, says Sentsov.

But he believes that with Moscow’s forces trying push on with their stalled offensive and encircle the Ukrainian capital, the fighting will get even heavier.

“If the offensive starts in our direction, we will be the first line to stop it and there will be more close combat,” he says.

For now, the promising directing career that saw Sentsov’s films screened at European film festivals seems a long way off.

“I am not filming now. First of all there is no time. Second of all, I don’t wish to,” he said.

Ukrainian officials offered him work in the press office “because of my famous name, but this was not my path. My path is one of a simple soldier.”

He said he had received letters of support, including from the European Film Academy and Ukrainian filmmakers “but now during the wartime it does not matter if you are a filmmaker or a bus driver or a simple worker — we are all soldiers”.

But he hopes to return to filmmaking one day, even if it may take time to have the “cold head” to make a movie about the war.

“I am not sure what kind of movie I will make. I had already written many scripts before the war. Perhaps I will come up with some ideas here,” he said.

For now though, he will continue to view the war through a rifle sight instead of a camera viewfinder.

“I lived different lives, my life changed, my activity changed. Filmmaking is only one part of my life — now my life is where I believe it to be most helpful to my country.”