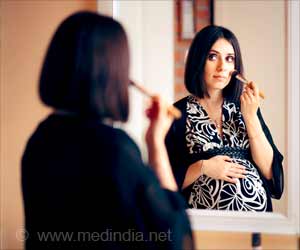 “We wanted to understand whether different weight change patterns during pregnancy impacted the child’s growth over time or the child’s potential to develop excess fat tissue,” said Beth Widen, assistant professor of nutritional sciences at UT Austin. “For boys, we didn’t really see that much of a difference in their patterns of weight and body size over time. But for girls, we saw some striking differences. This tells us there are differences between the sexes in this area of child growth.”

Weight change in pregnancy generally followed four distinct patterns in this study. One group of pregnant participants in the study lost weight during the first trimester, gained moderately during the second and gained rapidly during the third. A second group experienced slow weight gain across all three trimesters.

The researchers found that girls born to the fourth group in this study – individuals who gained weight more quickly at the start and end of pregnancy – had the highest body mass index measurements, the largest waist circumferences and the highest body fat percentages from ages 5 to 14. Conversely, girls born to study participants from the first group – individuals who lost weight in the first trimester, and gained moderately in the second trimester and rapidly in the third – had the lowest BMI, waist circumference and body fat percentages in the study.

No clear-cut pregnancy weight and childhood body composition patterns emerged with boys in the study. Widen speculates this may be due to differences between the sexes in growth and development in addition to differences in how boys and girls respond to prenatal exposures.

Researchers emphasize that finding a pattern in children’s body composition from pregnancy and across childhood is not the same as detecting causation, so further research is needed. Weight changes over the course of pregnancies and the relationship to those weight changes in babies and children is an area ripe for more research, Widen believes.

“This study shows us that there may be sex differences in child body composition based on what they are exposed to in utero,” Widen said. “But, really, we believe there is only a small portion of pregnancy weight gain that can be consciously changed – specifically among fat tissue – since much of the weight change is necessary to support the pregnancy. It is possible that these findings are just the start of research that can help us further understand risk factors for childhood obesity and may help us develop more individualized weight gain guidelines that support pregnant people.”