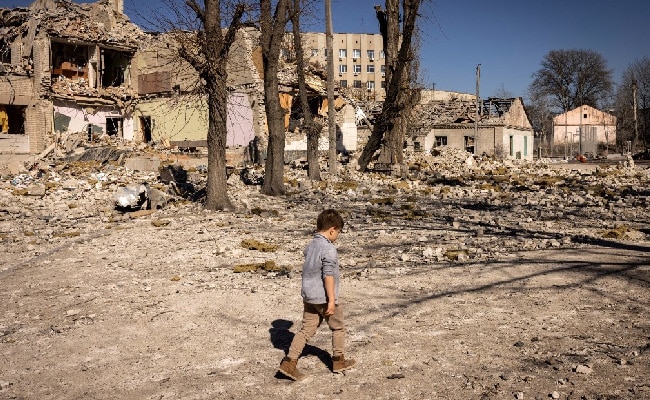 Displaced children make up nearly half of thse forced to flee their home due to Ukraine War. (File)

More than half of all children in Ukraine have been displaced from their homes since Russia launched its full-scale invasion on February 24, the United Nations said Thursday.

“One month of war in Ukraine has led to the displacement of 4.3 million children — more than half of the country’s estimated 7.5 million child population,” the UN children’s agency Unicef said.

Displaced children make up nearly half of the over 10 million people who have been forced to flee their homes since the invasion began.

More than 1.8 million children have fled Ukraine as refugees, while another 2.5 million are now displaced inside their war-ravaged country, the UN said.

“The war has caused one of the fastest large-scale displacements of children since World War II,” Unicef chief Catherine Russell said.

“This is a grim milestone that could have lasting consequences for generations to come,” she warned.

“Children’s safety, wellbeing and access to essential services are all under threat from non-stop horrific violence.”

Her comments came a month after Russian tanks rolled over the border, bringing a conflict that has already killed thousands of Ukrainian civilians.

The UN human rights office has confirmed that 81 children have been killed in the conflict and 108 injured but acknowledges that the true toll is likely far higher.

The UN has also decried that the conflict is taking a devastating toll on civilian infrastructure and access to basic services.

The World Health Organization has verified 64 attacks on health care, including on hospitals, clinics and ambulances, since the invasion began.

And Ukraine’s education ministry has reported damage to more than 500 schools and other education facilities, according to Unicef.

Unicef also cautioned that it is already observing a reduction in vaccination coverage for routine and childhood immunisation, including for measles and polio.

“This could quickly lead to outbreaks of vaccine-preventable diseases especially in overcrowded areas where people are sheltering from the violence,” it said.

The UN agency reiterated its appeal for an immediate ceasefire and for the protection of children from harm.

It stressed that essential infrastructure that children depend on, like schools, hospitals and buildings sheltering civilians, “must never come under attack.”

“In just a few weeks, the war has wrought such devastation for Ukraine’s children,” Russell said.

“Children urgently need peace and protection. They need their rights.”