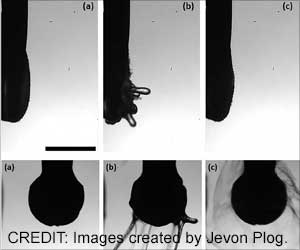 by AIP Publishing, Alexander Yarin and his colleagues discovered that the forces of a vibrating tool or dentist’s drill are no match for the viscoelastic properties of food-grade polymers, such as polyacrylic acid, which they used as a small admixture to water in dental settings.

Their results were surprising. Not only did a small admixture of polymers completely eliminate aerosolization, but it did so with ease, exhibiting fundamental polymer physics, such as coil-stretch transition, that served the intended purpose beautifully.

“What was surprising is that the very first experiment in my lab completely proved the concept,” Yarin said. “It was amazing that these materials were capable of so easily and completely suppressing aerosolization by dental tools, with significant inertial forces involved. Nevertheless, the elastic forces generated by small polymer additives were stronger.”

Their study documented the violent explosion of pockets of water supplied to teeth and gums that the dental tool aerosolizes. The spraying mist that accompanies a visit to the dentist is the result of water encountering rapid vibration of a tool or the centrifugal force of a drill, which bursts water into tiny droplets and propels these.

The polymer admixture, when used to irrigate, suppresses bursts; instead, polymer macromolecules that stretch like rubber bands restrict water aerosolization. When the tip of a vibrating tool or dental drill plunges into polymer solution, the solution threads into snakelike strands, which are pulled back toward the tip of the tool, altering the usual dynamics seen with pure water in dentistry.

“When droplets try to detach from a liquid body, the droplet tail is stretched. That’s where the significant elastic forces associated with the coil-stretch transition of polymer macromolecules come into play,” Yarin said. “They suppress tail elongation and pull the droplet back, completely preventing aerosolization.”