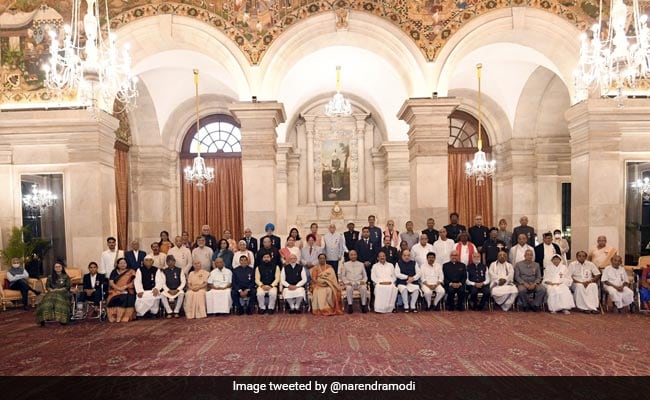 Many of those who received the Padma awards were “unsung heroes”

The award for General Rawat was received by his daughters while a close family member received the award for Khemka.

Many of those who received the Padma awards were “unsung heroes”, including 125-year-old yoga practitioner Swami Sivananda.

Members of the audience clapped as a bare-feet Swami Sivananda, dressed in a simple white kurta and dhoti, knelt before Prime Minister Narendra Modi who promptly got up and bowed, touching the ground as he returned the greeting.

These awards are given in various disciplines and fields such as art, social work, public affairs, science and engineering, trade and industry, medicine, literature and education, sports, civil service, etc.

The Narendra Modi government has been honouring many such “unsung heroes” who have been contributing to society in different ways with Padma awards since 2014 when it came to power for the first time.

Among the dignitaries present on the occasion were Vice President Venkaiah Naidu and Union Home Minister Amit Shah.

The awards are announced on the eve of Republic Day every year and are conferred by the President at ceremonial functions which are held at Rashtrapati Bhawan.

This year a total of 128 Padma awards are being conferred, including two duo cases (in a duo case, the award is counted as one). The list of awardees comprises four Padma Vibhushan, 17 Padma Bhushan and 107 Padma Shri awards.

As many as 34 of the awardees are women and the list also includes 10 persons from the category of Foreigners, NRI, PIO, OCI and 13 posthumous awardees. The second civil investiture ceremony is scheduled to be held on March 28.

Former West Bengal chief minister and CPI-M leader Buddhadeb Bhattacharjee, who was among the Padma Bhushan awardees, had refused to accept the honour.