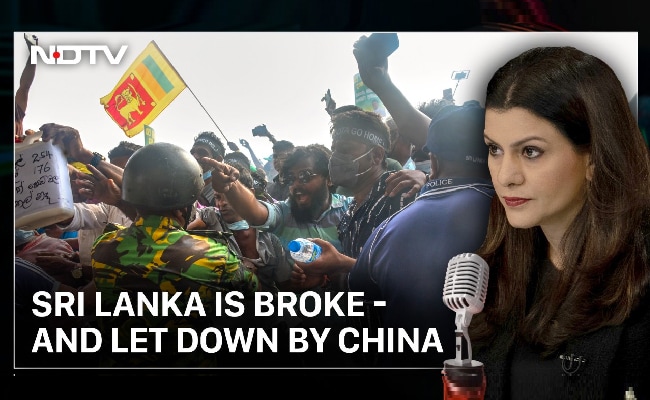 Hi, This is Hot Mic and I’m Nidhi Razdan. This week, you may have seen the heart-wrenching pictures of a batch of Sri Lankan refugees arriving on the coast of Tamil Nadu. Including little children, one as young as four months old. They are fleeing an unprecedented economic crisis in their own country. The situation in Sri Lanka is so bad at the moment that there is a shortage of food, a shortage of fuel, long power cuts and a massive rise in prices across the board. Intelligence agencies in Tamil Nadu say that thousands more may land upon Indian shores in the next few weeks. So why has this happened? What has caused this economic crisis – the worst that Sri Lanka has ever seen?

The meltdown has been driven by a shortage of foreign currency, which has led to a reduction in the imports of essential items. Sri Lanka depends heavily on imports, whether it’s for essentials like food, sugar, daal, petroleum, paper, medicines, cement and much, much more. The shortage of foreign currency has hit these imports badly, so badly, in fact, that the Sri Lankan government has had to cancel all examinations for schools for millions of children simply because they didn’t have paper. There have been long queues of people waiting to buy food and fuel. Angry protests have also broken out on the streets.

On Tuesday, the army was sent in to prevent protests from breaking out at petrol pumps because people had begun protesting there. There were reports that three people died while waiting for fuel in a queue for several hours. So how has the shortage of foreign currency actually happened?

Well, last week Sri Lanka’s president Mahinda Rajapaksa said in an address to the nation that the country has a trade deficit of $10 billion. This basically means that the country imported more items last year than it exported. That means more money went out of the country and less money came into the country. Over the years, this policy has led to a shortage of foreign currency within Sri Lanka. The collapse of Sri Lanka’s tourism industry is a major reason for this, since it contributes to around 10% of the country’s GDP. The 2019 serial bomb blasts across Colombo during Easter had already hit the country’s tourism sector. And then the last couple of years of the pandemic have made things exponentially worse. Another reason that Sri Lanka’s foreign currency reserves have gone down is that foreign direct investment into the country has also plummeted over the last few years. If you look at government data, FDI into Sri Lanka decreased to $540 million in 2020 compared to $793 million the previous year. And $1.6 billion in 2018. In this crisis, Sri Lanka has turned to other countries for help, including India.

On the 17th of March, India announced a $1 billion line of credit to Sri Lanka to procure food, medicines and other essential items. Last month, India extended a $500 million line of credit to Sri Lanka to help it buy petroleum products. But ironically, one of Colombo’s closest friends, China, has actually added to their problems and turned out to be less dependable than they had hoped. Sri Lanka has been borrowing recklessly from China over the last few years to fund its infrastructure projects. Before the pandemic, Sri Lanka owed China, about $5 billion amounting to 10% of the country’s external debt that is dominated by sovereign bonds. Faced with the economic crisis now, President Rajapaksa had asked China to restructure its debt to the country.

But according to a report in the Hong Kong Post a few days ago, Beijing actually turned its back on Colombo. Publicly, China has only said that the two sides are negotiating the matter and hasn’t given any specific details. In recent days, soon after New Delhi extended help to Sri Lanka, Sri Lanka sought a new loan and buyer’s credit from China for $2.5 billion. It’s interesting to note here that President Rajapaksa has been seen as pro-China. But over the last year or so, the mood within Sri Lanka has turned more wary about Beijing. A lot of the debt burden on Sri Lanka is a result of China’s Belt and Road Initiative projects like the Hambantota Port and Colombo Port City, for which Chinese agency lent large amounts to Sri Lanka under stiff terms of repayment.

A media report recently said that China-assisted projects in Sri Lanka are likely to deepen the debt of the island nation. Moreover, locals have been protesting against some of these projects which they say will affect their livelihoods. One of these projects is an industrial park attached to the Hambantota International Port, which has incited violent protests by locals because they fear that the area will turn into a Chinese colony. As a result of all of this, Sri Lanka may be reassessing the extent to which it can bank on China At the end of the day, India has turned out to be a more dependable neighbour.