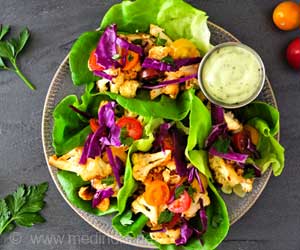 At first Hugo said that the switch to a plant-based diet wasn’t easy, but he eventually found himself more energetic.

Speaking to the BBC, he said: “I was on the vegan diet and it really does take a hit on your body.”
He added: “I think the first couple of weeks it was really craving and wanting meat and dairy and cheese. I love cheese.”

“I was now having to eat fruit and nuts and alternatives that didn’t have any dairy in them.”

“I was eating a lot more wholesome food, which meant that my sugar levels were a lot satiated during the day. I felt more energetic.”

Meanwhile his meat-eating twin said his gym performance was “up and down a little bit more.”

Ross noticed how much processed food he was eating after checking out his twin’s super healthy vegan meals.

By the end of the 12-week study, the men found that there “wasn’t a huge difference, if any” between the two diets.

But Hugo did see his cholesterol levels drop “off the scale,” while also losing weight and boosting his resistance to type-2 diabetes.

By comparison, his brother also had 13 percent body fat at the start, but he put on 10 pounds of muscle, and also gained fat, bringing his end body fat percentage up to 15 percent and his weight to 189 pounds.