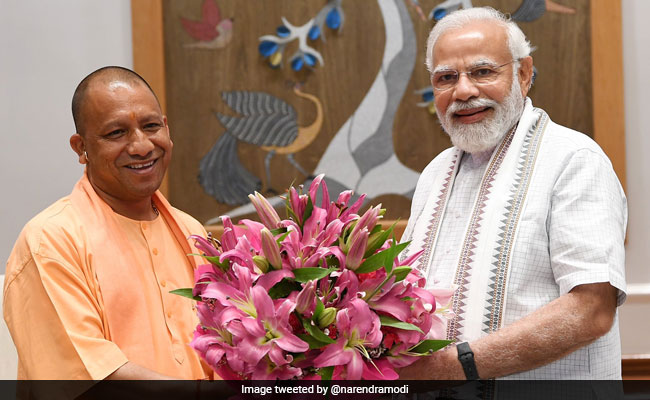 There will be apparently be special stress on OBC and SC/ST ministers in Yogi Adityanath’s cabinet.

Yogi Adityanath will be sworn in as Uttar Pradesh Chief Minister for a record second straight term tomorrow, likely with 45 ministers, sources said today, hours after a late-night meeting of the BJP leadership.

Yogi Adityanath met with Union Home Minister Amit Shah and BJP chief JP Nadda last evening to finalise names for his cabinet ahead of the oath ceremony on Friday.

The party has rubbished speculation that a disagreement over cabinet names has held up the swearing-in. Yogi Adityanath and Prime Minister Narendra Modi are “completely in sync” on cabinet names, sources said, downplaying any rift.

The BJP has not yet taken a call on the names of the deputy chief ministers, sources said. It is still not clear if the incumbents – Keshav Maurya and Dinesh Sharma will continue. Mr Maurya, among the party’s biggest OBC faces in UP, lost the recent election, while Mr Sharma did not contest.

However, Mr Maurya, who is believed to be close to the BJP leadership, has reason to hope – in Uttarakhand, the BJP reappointed Pushkar Singh Dhami as Chief Minister even though he lost the election.

As for the rest of Yogi Adityanath’s cabinet, “proportional representation will be key”, say sources, adding that the BJP is now the natural choice for “all communities”.

There will be special stress on OBC (Other Backward Class) and Scheduled Caste/Tribe ministers, they say.

There will be a stress on women ministers, according to sources. Many members of legislative council are also likely to be made ministers.

Sources say there will be room for a cabinet expansion later.

The BJP with its allies won 274 seats out of 403 in Uttar Pradesh, becoming the first party in over three decades to form a government for a second consecutive time in the state.

The oath ceremony will be held at the Atal Bihari Vajpayee stadium in Lucknow. Chief Minister of all BJP rules states and other top politicians from across the country will attend the swearing in ceremony. PM Modi will be the chief guest.